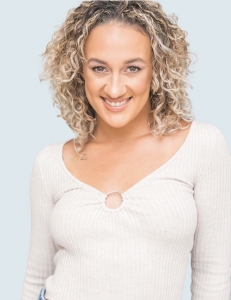 Talia grew up in Oceanside, CA and has been a part of the dance community for 17 years. She began her training at the age of 7, under the direction of Jocelyn K. Wilson, at Oceanside Dance Academy. There she learned the foundations of Hip Hop, Jazz, Ballet, and Tap. She later continued her training at Evoke Dance Movement under the direction of Stacy and Cassie Sopher. When Talia was in high school, she participated as a member of both the dance and cheer teams for all 4 years.  She also extended her dance training and was a part of several professional companies such as Unity SD, Culture Shock SD and ThaMost.

After graduation, Talia joined Mather Dance Company under the direction of Shannon Mather.  She then was accepted into the “Bridge into the Industry” program where she learned valuable information about the professional dance industry.

In addition to dance, Talia has also participated in several pageants. She was crowned “2013 Miss Fabulous Faces”, Top 15 at “Hawaiian Tropics” and was crowned “Hawaiian Tropics Talent Winner” with a routine choreographed by Chrissy Trinh.  Recently, Talia decided to focus her time and energy on her main passion, which is dance.  Talia moved to Los Angeles and has been living there for the past 3 years. She enjoys dedicating her time and working hard for what has become even more of a passion for her- dance.

Talia had a prestigious opportunity to compete on NBC’s World Of Dance as a member of a local San Diego company called “ThaMost”. Her additional credits include Becky G, Haliee Steinfeild, Tyga, Keke Palmer and many more.