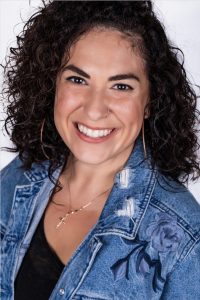 A Dance Educator for over 12 years, Leah is well known for her enthusiastic and technique driven teaching style. Leah teaches and mentors some of the best youth and pre-professional tap dancers in the nation. Featured in Dance Teacher Magazine multiple times, some of Leah’s credits and accomplishments include being a founding member of Sound Effects Tap Company under the direction of Christy Hernandez, performances for Mattel Toys, vocal and dance performances for American Idol top finalists, was the featured pre-show entertainment for Broadway’s hit touring show- 42ND Street, choreography for international dance campaigns for Nestle, appearances on national television shows, performances with Sarah Reich’s Tap Music Project, founding member of Jason Janas’s Co.MMIT tap company, and was the Choreographer and Artistic Director of Encore Tap Company (professional tap division of Encore Dance) and Reverb Tap Company (professional division).

Out of many submissions from all over the nation, Leah was the winner of Operation: Tap’s Choreographer Challenge where she traveled to New York to perform and to have her piece, “Forever” screened at the Symphony Space. Leah’s hit and award-winning choreography has also been featured across the U.S. at acclaimed film festivals and events such as the acclaimed Newport Beach Film Festival (2018 Official Selection), L.A. Tap Festival, AT&T Performing Arts Center in Dallas, TX, Portland Tap Festival, University of D.C., Rhythm in Fusion Festival, San Diego Tap Festival, Pasadena Dance Festival, Tempe Center for the Arts Theater and at the Barclay Theater to name a few.

Leah’s most recent projects include being the Founder and Artistic Director of Reverb Production Company which is also comprised of acclaimed pre-professional and youth tap companies; Reverb and Reverb Jr. Her companies have performed across the United States and have become recognized for their various production pieces which combines dance and film. Leah is also the creator and producer of the acclaimed Orange County Tap Experience and is the Founder and Director of the Orange County Tap Festival.