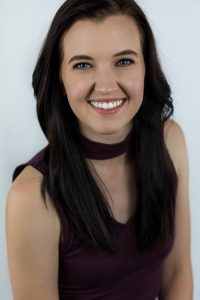 Stephanie started dancing at the age of three at a small recreational studio in Western New York. She studied Ballet/Pointe, Jazz, Tap, Hip-Hop, Modern and Musical Theater among many other styles. In high school she was a student choreographer for Musical/Drama productions as well as a dance captain/choreographer for a community competitive dance team which won many awards. Stephanie started assisting dance classes in middle school and in her senior year of high school she started instructing her own classes in Tap, Jazz and Hip-Hop. It was then that she knew that instructing dance was what she was destined to do with her life. At the age of 19 she opened Curtain Call Dance Academy and successfully ran the business for three years before selling the company. The competition teams at her studio won many titles and the students thrived under Stephanie’s direction. Her passion for choreography and her despise of the snow led her to move to Southern California and she has loved every minute of it. Besides teaching and assisting families at the front desk at TDC, Stephanie is also the choreographer for Chaparral’s Platinum FX Show Choir, Chaparral’s Dynamics Show Choir and James L Day’s Middle School Show Choirs (Sparklers and Treble Tones). Stephanie loves being a part of the TDC family. She adores teaching and her favorite part is watching her students grow as both a dancer and a person.